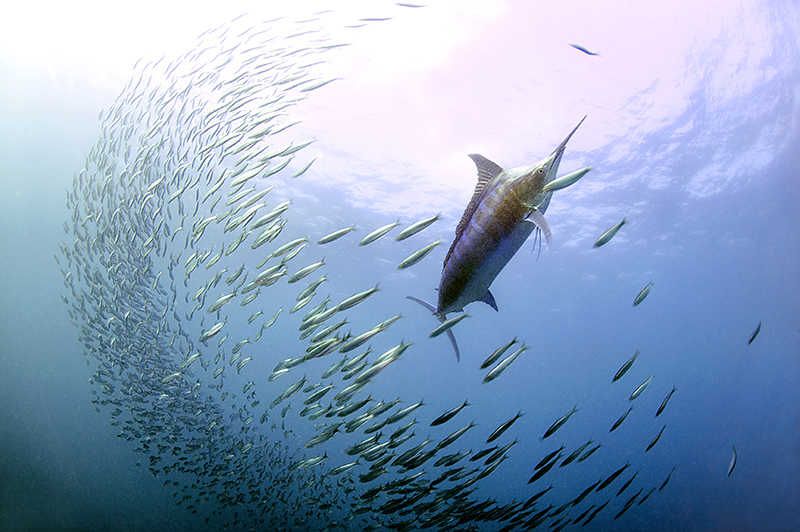 Blue Marlin on a bait ball. Taken during our 2015 Sardine Run expedition at Mdumbi on the Wild Coast. Photo by Daniel Botelho.

The Sardine Run is one of the great marine events on the South African coastline.

See all about our expeditions here.

The Sardine Run is one Nature’s most spectacular events.

This is why so many divers spend a week or two somewhere along the Wild Coast to try and experience the action.

It is however not only for scuba divers. Snorkel divers can have as much fun. In fact most of the time the action is followed using snorkel, many non divers also enjoy the spectacular breaches of the Humpback whales and the incredible bird action.

Most of South Africa’s sardines is live in the cooler seas of the South Western Cape. . However during each South African winter, great shoals of sardines move eastwards up the Wild Coast.

This is what is termed the Sardine Run. These great shoals of sardines utilise seasonal cool water on the continental shelf of the Wild Coast.  The cooler water occurs in a narrow band between the coast and the warmer, southward flowing Agulhas Current.

Each year in June or July along the Wild Coast as well as the KwaZulu-Natal south coast people wait in anticipation for the sardines to arrive. The moment the news gets out, crowds of people join the sharks, gamefish, marine mammals and birds in a feeding frenzy.

Like their close relatives, the anchovies and herrings, sardines (Sardinops sagax) live out their lives in huge shoals in the surface layers of the ocean. These fish are small, but they make up roughly a quarter of the world’s fish catch by weight.

Sardines are cold-water fish and are usually found in areas of cold ocean upwelling.

The seas off the Wild Coast have less food than the plankton rich South Western Cape waters, and the favourable cooler conditions are only temporary.  The shoals of sardines are also followed by many predators. As  the fish become concentrated near the surface in a narrow inshore band of water, the shoals are quickly located by schools of marauding predators that are whipped into a frenzy by this brief period of plenty in these otherwise less productive waters.

Then we get the marine mammals like like Cape fur seals, dolphins and even whales. All in hot pursuit.

As the shoals are driven to the surface, one can see huge flocks of Cape Gannets plummet out of the sky, dive bombing the sardines. Its not only Gannets, but also Cape Cormorants, Terns, Gulls, Albatross, and Skua.

The Gannets are quite incredible. They dive from a great height into the water, as deep as 10 meters, where they swim around biting at any and all sardines within sight.

The appearance of common dolphins along the Wild coast and the KwaZulu-Natal south coast is closely associated with the arrival of the Sardine Run.  Some observers are of the opinion that female dolphins use the bounty of the sardine run to wean their calves and build up their fat again.

The Sardine Run  is one of the greatest congregations of ocean predators known to man.

Where will the action be ?

The simple answer is that nobody really knows.

Not exactly when or where the shoals will be driven to the surface.

Yes we know it happens during the South African winter. Specifically during the months of June and July.

The Wild Coast is what we call the stretch of coast between East London and Port Edward.

Paradoxically neither Port Edward nor Port St Johns are ports anymore. East London is a small port city. Apart from East London, most launching sites can get fairly rough. This is why the ubiquitous 8 meter RIB, much preferred by South African boat operators is used.

Most boat operators base themselves, obviously, where they can launch their boats easily.

There are not many suitable boat launching sites on the Wild Coast.

The second consideration is that people need a suitable place where they can stay. This is why most operators work out of East London or Port St Johns. Lots of accommodation options as well as a reasonable launch.

We base ourselves in the heart of the rural Wild Coast at a place called Mdumbi (or Umdumbi). This is one of the best launching sites on the entire Wild Coast.

The advantage is an uncrowded and protected launching site. That means no long line of boats waiting their turn to launch.

Although good visibility and baitball action cannot be guaranteed, one can still see raw nature at its best. Hundreds if not thousands of dolphins, whales and birds.

A bait ball is formed when common dolphins (Delphinus delphis) work together to herd sardines into a tight group swirling around itself.

Normally the dolphins herd the bait ball towards the surface, and this is when the birds really get in on the act.
Sometimes these can be of short duration and the action can be fast moving. The holy grail of the sardine run is the static bait ball. This is a bait ball that remains in one spot, giving divers the chance to get on scuba and see the predators work the bait ball.